Surroundings and places of interest 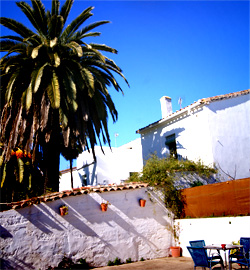 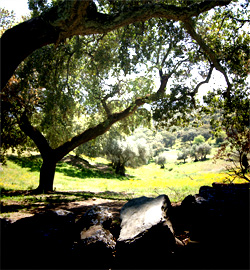 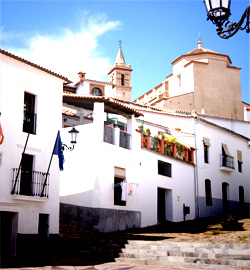 Finca Las Tobas is a nine acre estate on the outskirts of Higuera de la Sierra, a small white village of 1,300 inhabitants in the Sierra de Aracena and Picos de Aroche Natural Park, in the province of Huelva, South West Spain.

The Sierra de Aracena and Picos de Aroche Natural Park encompass 184,000 hectares, an impressive 90% of it covered by woodland of mainly Mediterranean oak. The region is a UNESCO Biosphere Reserve and one of the largest protected forest areas in Europe. 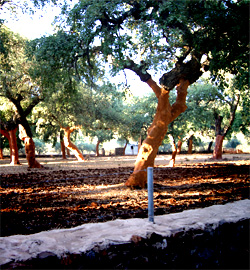 The area is recognized for its important cultural heritage, and has large expansive areas of holm and cork oaks, surrounded by pasture, meadows and Mediterranean scrub. The region has a low population density, with 29 villages of extraordinary beauty, and with only 40,000 inhabitants scattered over its 3,000 square kilometres it is probably one of the least known and visited of all the parks in Andalucia, which is surprising considering the lush vegetation that thrives here almost all year round. Spring brings a profusion of wild flowers, the autumnal colours light up the Sierra and a gourmet feast of wild mushrooms are found in masses given the right conditions.

The landscape is full of contrasts, with gently rolling hills and wooded valleys gradually giving way to dramatic rocky outcrops on high peaks. There is a rich and varied wildlife with plenty of chances to spot birds of prey or hearing woodpeckers in spring. Whitewashed towns and villages, often huddled round a large church or castle, are dotted around the Sierra. With an extensive network of footpaths and centuries-old drovers' tracks, many now signposted and marked on walking maps, it's easy to explore the Sierra on foot. With many walks in the central part of the Sierra, you don't have to go far to reach the next village and there are lots of circular routes.

The Sierra is also home to the prized Iberian black-footed pig, the pata negra. In Autumn, this special breed ranges free in the forests, to forage for and feast on the acorns that fall from the oak trees. The hams are salted and left to cure in dark caverns to become the delicious jamon iberico, a ham perhaps the most famed throughout world. Hams from the village of Jabugo are, without doubt, the most highly sought after gourmet delicacy in all Spain. 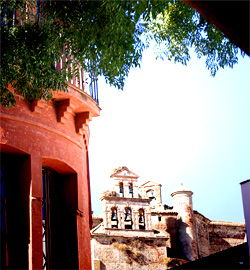 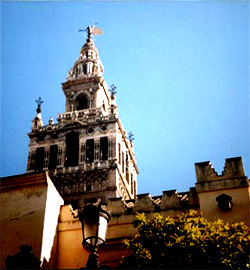 (From 2km) Explore nearby towns and villages

The Sierra de Aracena Natural Park is a walker's paradise. There are over 700 kms of signposted trails through mountains and valleys, chestnut forests and passing through white villages nestled on the hillsides. Step back in time as you stroll along the ancient trails used by local people for hundreds of years.

You will certainly be well off the beaten track following some of these old paths to explore the verdant landscapes where black Iberian pigs snuffle amongst the Cork and Holm Oak woodlands and bird spotters have a good chance of seeing black vultures, eagles, heron, egrets and the storks that nest on almost every village church.

The rolling hills and white villages offer wonderful walking opportunities. The character of the villages has changed little over the centuries, their history reflected in their architecture and the landscape surrounding them. On walks you pass along Roman cobbled tracks, glimpsing abandoned watermills and ancient hill forts left by the Moors. You can still see villagers working their small farms, hear the ringing of goat bells among the oaks and chestnuts, and the bubbling of the many streams and springs which abound in these hills. Many of the tracks are accompanied by the ancient Arabian water system "acequia".

The Spectacular Stalactite Cave of Aracena is one of the most beautiful caves in Spain. It was discovered only one hundred years ago and is situated under the Mudejar castle of Aracena. With daily guided tours, Aracena’s Gruta de las Maravillas (Cave of Marvels) is one of the most important natural monuments in the whole of Andalucia. The cave is situated in the centre of Aracena and you can find its entrance in Pozo de la Nieve Street. This fantastic natural monument inside the hill below the castle was formed by water filtering through the calcareous rock over the ages. The size of its lakes, the abundance of rock formations and its sheer magnitude make this subterranean complex a must-see. There is a 2,130 metres long horizontal cavity of which you can visit 1,200metres. The erosive action of water on the limestone rock over time has created a series of “karst” rock formations of extraordinary beauty. Story tells that a shepherd discovered the cave. The first historic reference to its existence was in 1886 and in 1914 it was opened to the public. During the visit you can see the twelve chambers and six lakes, which have all been illuminated.

The Embalse de Aracena is a beautiful lake in the midst of the mountains: One of eight lakes that provide the city of Seville with water. Most of the time it lays in total calmness as it is only visited by local people during the weekend. It’s an esteemed spot for the sports-fishermen. In summer a local agency supplies canoes. There are trees and shaded picnic tables looking over the lake. 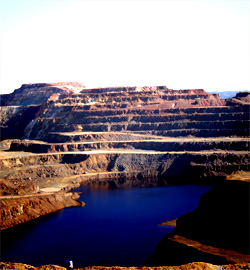 Inspiring for all and a must for those who go for abstract. Dazzling colours especially early morning and at sunset provide an unearthly and savage atmosphere. Rio Tinto is believed to be one of the oldest mining sites in the world, as the area is rich in copper, iron ore, silver and other metal deposits. There’s a possibility of a train ride into the mine on Sundays.

Visit the old ‘Mudejar’ style centre, the Moorish Alcazar palace, or stroll along the Avenidas or Rio Guidalquivir. There’s a bus-stop in the village of Higuera, with a twice daily bus service to Seville Plaza de Armas bus station.

With its rich artistic heritage, it's not surprising that Seville has a number of art galleries. These range from the beautiful Museo de Bellas Artes (Fine Arts Museum), which has a fine collection of art by Spain's most celebrated painters, to smaller exhibition spaces with more contemporary shows. Other historic buildings housing notable works as well as frequent exhibitions, include the Casa de los Venerables in Santa Cruz (frescoes by Valdés Leal) and the Hospital de la Caridad in Arenal (works by Murillo, Valdés Leal and Roldán).

In 1994 UNESCO designated the Doñana National Park a World Heritage Site and Biosphere reserve. It is a protected area with one of the best Deltas of the world, vitally important for numerous European migratory birds that breed here. It’s a territory of great beauty and high ecological value measuring almost three hundred thousand hectares.

Activities in the natural environment

Colourful migrant birds have already arrived by April, with bee-eaters busy staking out their nest sites in roadside banks, and red-rumped swallows investigating the many stone bridges of the park. Lesser spotted woodpeckers, woodlarks, Iberian chiffchaffs, redstart and rock sparrows can be seen in the chestnut groves, while the meadows harbour black-eared wheatear, crested tit, short-toed treecreeper, woodchat shrike, Iberian azure-winged magpie and curl bunting. Black storks feed in the marshy grasslands along the River Múrtiga, to the background accompaniment of myriad nightingales and Cetti's warblers. Griffon and Egyptian vultures, black and red kites and booted and short-toed eagles are also seen regularly.

You can also take a nature trail on horseback through the Aracena Park. An experienced guide will show you the best of the nature reserve’s flora and fauna, typical villages & wonderful views as the trail takes you through the mountains. No previous riding experience is necessary.